ake your broken heart,
make it into art
-Carrie Fisher for broadwayworld.com.

In 1969, Dr. Elizabeth Kubler-Ross, the noted Swiss-American psychiatrist broke the process of grief into five stages, denial, anger, bargaining, depression, and acceptance. Marcus Simeone is no stranger to grief. In addition to being an accomplished singer of blues, jazz, soul, and R&B he is a therapist and social worker. But his knowledge of grief is not merely academic. Having lost his partner in 2017, he has walked the five stages of grief and knows their colors. Together with his musical partners, Sean Harkness and Lina Koutrakos he took that experience and made it into art. Their album Blue is a profound expression of grief and its transformative power in the life of a passionate artist. He turned to Koutrakos to shape the album into a cabaret event. I was fortunate enough to catch the latest iteration of Blue last night at Don't Tell Mama. 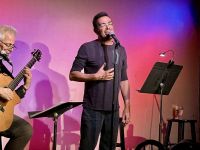 Marcus Simeone is a singer of great range and much soul. He is fearless in going to very intimate, emotional places. He is also a born storyteller, creating vivid images with only a few words. Sean Harkness plays guitar like he made a deal with the devil. His fingers do things that should be impossible. He plays every inch of the instrument, not only the strings but the fingerboard, the frets, the bridge and he even uses the body of the guitar as percussion. The partnership between these two artists is so simpatico, it feels like one mind.

They opened with a snippet of the Carpenter's "Rainy Days and Mondays" wedded with "Here's That Rainy Day," probably one of the bluest songs in the American Songbook. It was a perfect mood setter. They followed with a great reading of "Blue Side." Sean Harkness did the first of several great instrumentals in "When Sunny Gets Blue." Marcus Simeone found beautiful nuances in Sinéad O'Connor's "Nothing Compares 2 U." Harkness added his vocals in a duet on "When Something is Wrong With My Baby."

Sean Harkness gave us a musical history lesson, singing "Out of Nowhere." An avid Trekkie, he explained that when the creators of Star Trek were pitching the show, they had trouble explaining a space show to network executives. They would describe the credit sequence saying that a spaceship "came out of nowhere." They remembered this phrase when writing the theme song and based the now-famous tune on the chord progressions in Johnny Green's 1931 tune.

Simeone gave a sultry performance of the great jazz standard "Angel Eyes. Harkness gave us one of his original tunes with "Holy Days." One of the highlights of the night was a cool as ice rendition of Anita Baker's "Rapture." I was particularly fond of Simeone's interpretation of Sondheim's "Losing My Mind," which he began with the song's bridge. It was a thoughtful reinvention of this familiar classic. They gave us a surprising uptempo rendition of Duke Ellington's torch song "Mood Indigo." I love it when an artist can make you see a standard in a brand new light. 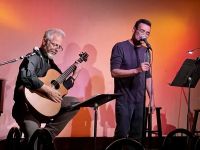 Harkness and Simeone saved the best for the last part of their show. Harkness gave us a brilliant instrumental version of "My Favorite Things," which he introduced "with apologies to Julie Andrews." It was so delicious, no apologies were necessary. Marcus Simone delivered a devastating 11 o'clock number in Sam Smith's "Lay Me Down." It had the kind of internal focus that cabaret singers should study as a master class.

They ended their show with Julia Fordham's delightful "Skipping Under the Rainbow." It was a beautiful full-circle ending to a show that started with rain and ended with rainbows. Kudos to Lina Koutrakos for giving this show that kind of structure. A show about grief is a risky proposition. But Marcus Simeone, Sean Harkness, and Lina Koutrakos avoided anything mawkish or sentimental. The show felt cathartic, an expression of a universal humanity. It was a praiseworthy glimpse into the broken heart of artists with a unique and sensitive perspective on life.